In March of 1959, the Labor Premier of NSW Joseph Cahill defied political consensus and ignored the nervousness of his policy wonks by pushing ahead with the construction of the Sydney Opera House. Across both sides of politics, general opinion held that the ground earmarked for the project would not hold the structure’s weight and the architect’s dramatic sails were virtually unbuildable.

The prudent path, so the bureaucracy declared, would have been to conduct another review or undertake further studies of the project. Safety first was their motto, particularly when it came to their own political survival. However, Cahill knew only too well the dangers of kicking the can down the road.

“In a young country like ours,” he said, “We ought to be courageous”.

It is with that same spirit that I have approached the construction of the Inland Rail. A project which will, for the first time in Australia’s history, link all three eastern seaboard states with a common gauge rail line. This project first began as an idea in the late 1800s but like far too many reasonable, common-sense ideas, it has faced opposition from the same bureaucratic timidity that sought to prevent the construction of the Opera House.

Despite overwhelming support for the project from farmers, logistics companies, and end-users, the project found itself at the last minute being attacked by the Labor party. A Labor-led Senate Review of the project came up with the unsurprising conclusion that, gasp, yet another review of the Inland Rail route should be undertaken. For those at home who have not been keeping score, that would have been the eighth review of the route.

How times and Labor have changed. Where once stood a party that advocated courage and decisiveness now stands a party that deals only in dither and delay. The party that once wanted to put people to work now demands that jobs be put on ice. Sadly this opposition to productivity extends beyond Labor’s views on rail and, most concerning for rural and regional Australians, dominates its views on dams and mines as well.

This is perhaps the most important differentiator between the Government and Labor leading into the next election; We desperately want to build productivity driving infrastructure and Labor don’t. The Inland Rail project recently took a huge step forward when Deputy Prime Minister Barnaby Joyce rejected Labor’s report and announced the letting of the detailed design and costing contract to preferred contractors BHQ JV. This will result in a construction contract of approximately $1.2b being let in early 2022, ending speculation on the route between the Queensland border and Toowoomba and bringing certainty to all involved. 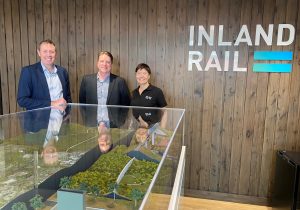 This announcement couldn’t come at a better time.

Australia’s COVID induced debt levels are at the highest they’ve ever been since the second world war. Thankfully our interest rates are at the lowest they’ve ever been which creates the false impression that our debt is free. The truth is, we just haven’t felt the full weight of our debt. Not yet. One day those interest rates will rise and up with them will go our repayments.

There are two paths in front of us that will decide Australia’s fortunes when that day comes. Either we invest now in infrastructure that drives our productivity such that we increase our economy to be able to continue our existing standard of living and paying down the debt or we do nothing and be forced to choose what cuts in spending we need to make.

Act now and build our economy for the increased costs coming or do nothing and suffer later. The choice before the Australian people is: do you want doers or reviewers?

Much as the Opera House has provided benefit to the nation for generations, so too will Inland Rail drive Australia’s growth for years to come. The Liberal National Government is getting on with the job of preparing the nation for its future challenges because in a young country like ours we still ought to be courageous.