You are here:
Community IssuesInfrastructureMedia Releases 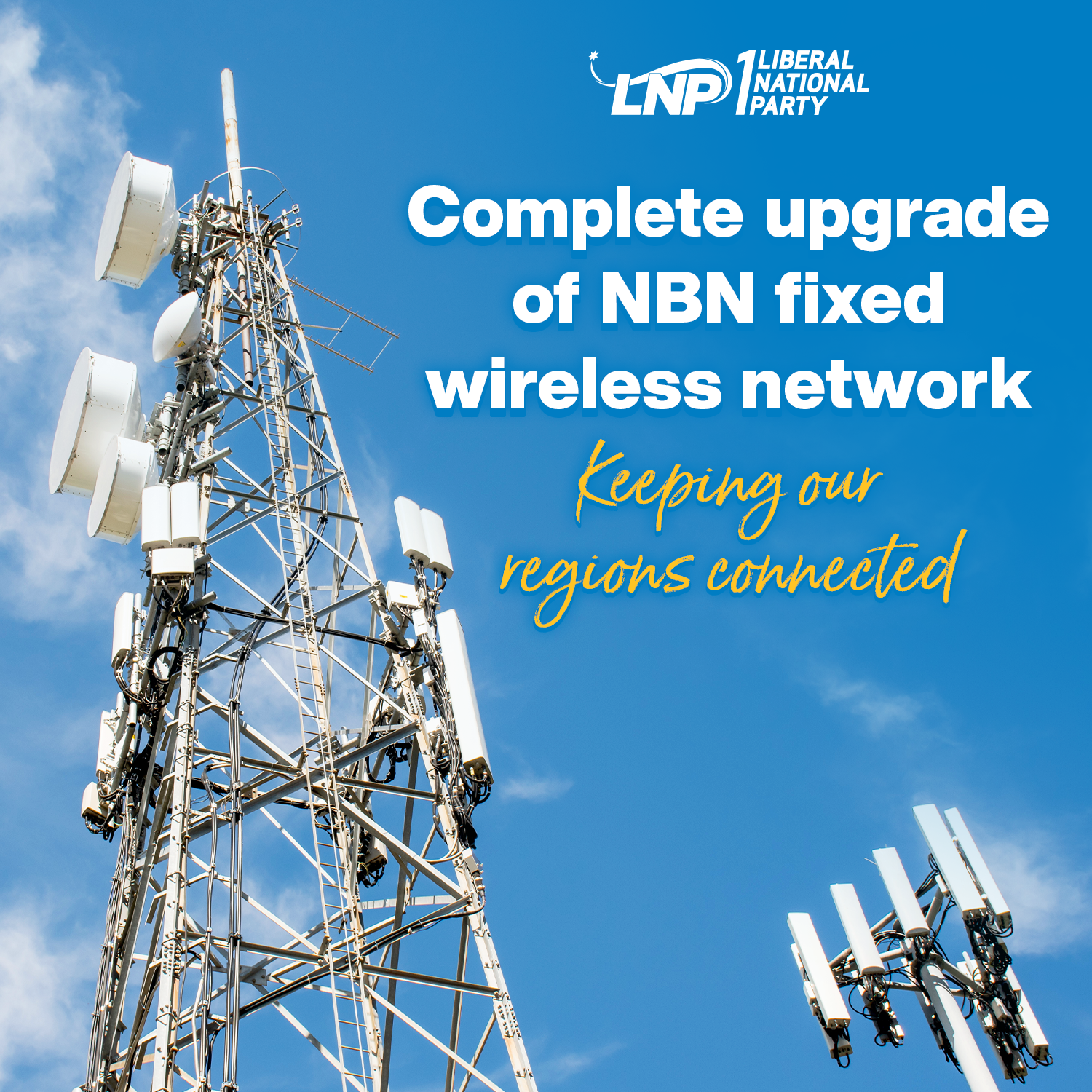 The Toowoomba Region will have access to a significantly more capable NBN network following a $480 million investment by the Morrison Government in the 2022-23 Federal Budget.

Minister for Communications, Urban Infrastructure, Cities and the Arts, the Hon Paul Fletcher MP, said the investment in NBN Co’s non‑commercial fixed wireless network will significantly improve the quality of services being provided over the NBN fixed wireless and satellite networks.

“By using the latest 4G and 5G wireless technology, this upgrade will extend the coverage range from a tower, and allow higher speed services to everyone served by the tower,” said Minister for Communications, Urban Infrastructure, Cities and the Arts, the Hon Paul Fletcher MP.

This upgrade will see NBN offer new higher speed services to the fixed wireless network: 100 Megabits per second (Mbps) to all 750,000 premises able to access the new, expanded coverage footprint, and a 250 Mbps service will be available to 85 per cent of premises.

It also means much higher actual speeds during the “network busy hour” – the time of day when the network is most heavily used, typically around 8:00 pm at night. The network design metric for the busy hour today is 6 Mbps; this will rise sharply following the upgrade, to 50 Mbps. This means customers will benefit even if they do not order a higher speed plan, as they will experience a sharp increase in the actual speed of their current plan.

This upgrade also means big benefits for NBN satellite users. Because some existing NBN satellite customers will move to fixed wireless, this will free up capacity on the satellite network.

As a result, NBN Co will be able to offer an almost immediate increase in average data allowances for NBN Sky Muster satellite users. Average monthly data allowances for standard Sky Muster plans will increase to 55 Gigabytes (GB) in the short term, increasing to 90GB once the fixed wireless upgrade is complete in around two years’ time.

Federal Member for Groom Garth Hamilton said the investment in the NBN was a welcome decision by the Morrison Government.

“Regions like ours across Australia made their voices heard through the Regional Telecommunications Review – telecommunications matter for every community, including ours, and this is very much a welcome investment in the region’s future,” Mr Hamilton said.

“Having access to reliable and high speed internet can really make a difference for people in our community, whether that be families connecting with loved ones, to business owners selling goods here and overseas.”

“The NBN is a critical and core part of our national infrastructure and economy, enabling employment, connecting families, and supporting business, including in the Toowoomba Region, Minister McKenzie said.

“This investment provides a comprehensive response to Recommendation 6 of the 2021 Regional Telecommunications Review, and is one part of a suite of measures we will announce as part of the Government’s response to the Review in coming weeks.”

“This is another important investment in the NBN that will deliver better and faster internet to Australian households and businesses across the fixed wireless network,” Minister Birmingham said.

“The NBN has been there to support Australians throughout the pandemic. Our Government will continue to make critical investments in the NBN that will enhance the internet experience for households and businesses right now and into the future.

The Committee’s report, titled Step Change in Demand, was presented to the Australian Government in December 2021 and tabled in parliament on 14 February 2022.

For more detail on the Hartsuyker Review and the Committee’s report, a Step Change in Demand, visit https://www.rtirc.gov.au/