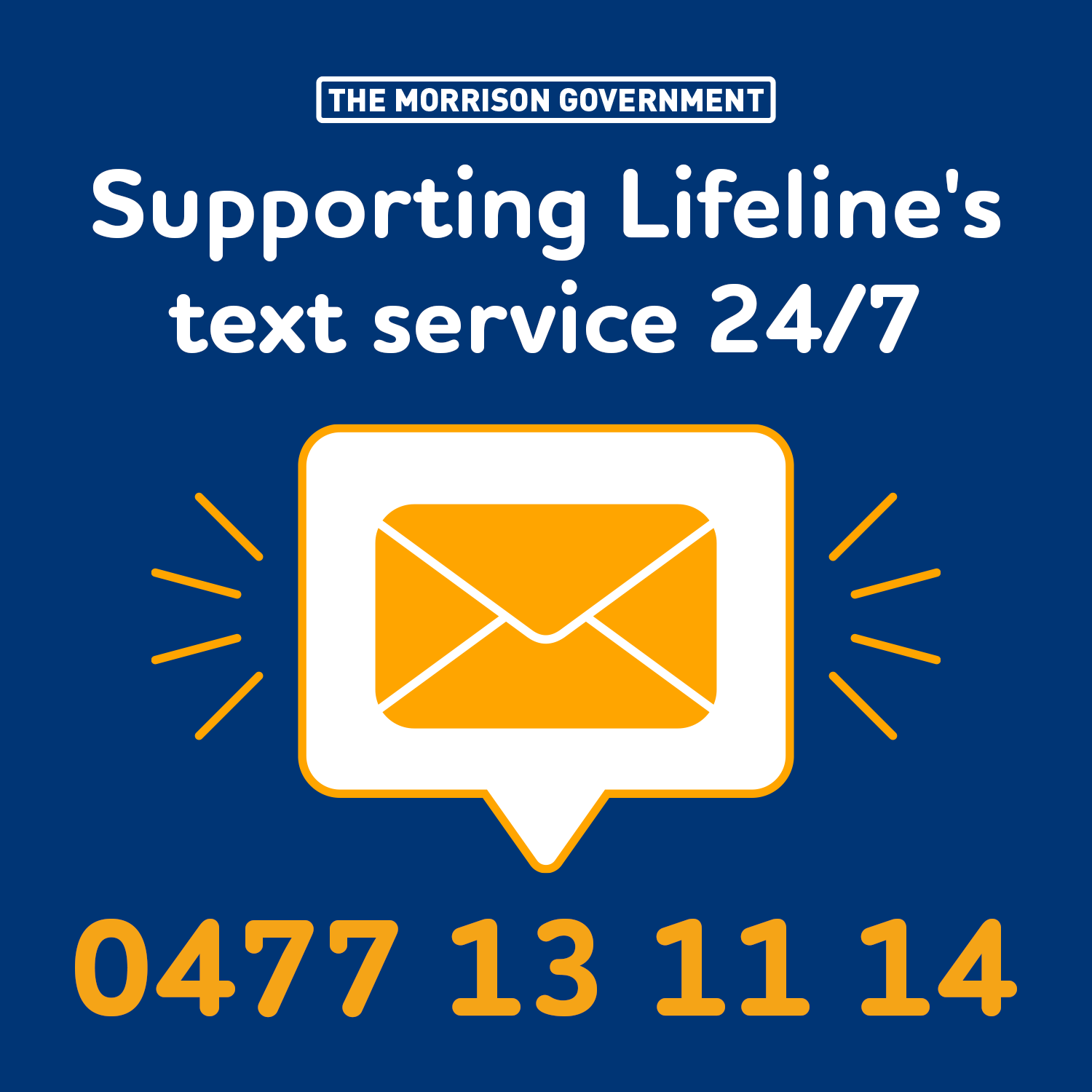 Supported with $1.5 million in Morrison Government funding, Lifeline has today launched a 24/7 crisis text service to expand its support for Australians struggling with the challenges of the COVID-19 pandemic.

Australians are reaching out to Lifeline’s crisis support and suicide prevention services in record numbers, hitting more than 3700 calls in one day last month.

Federal Member for Groom, Garth Hamilton said the Lifeline Crisis Support Text Service is now available 24 hours a day, 7 days a week via confidential text message to 0477 13 11 14. Following a few questions via text, Toowoomba Region residents and people from around Australia are connected to a trained Lifeline crisis supporter.

Mr Hamilton said Lifeline’s 24/7 text service is an important expansion of the vital service the charity provides in crisis support and suicide prevention.

“The significant surge in demand for Lifeline’s services during COVID means more people are reaching out for help, and services like Lifeline are there to help,” Mr Hamilton said.

“The expansion of the text service is backed by data showing that it is the preferred channel for high-risk members of the community including young people, those experiencing family and domestic violence, and Aboriginal and Torres Strait Islander people.”

Minister for Health and Aged Care, Greg Hunt, said Lifeline provided an invaluable support to all Australians and the 24/7 text service would help increase that support.

“The introduction of the 24/7 service follows a successful 2-year pilot of a limited text service, made possible with $2.5 million from the Morrison Government,” Minister Hunt said.

“The Morrison Government remains committed to working towards zero suicides, backed by our $2.3 billion investment in mental health and suicide prevention in the 2021–22 Budget, and our ongoing support for Lifeline as Australia’s leading suicide prevention agency.”

Lifeline received a record 1,070,860 calls from Australians in crisis in 2021 but managed to increase its average call answer rate to 90.4%.  In the same time period, the service also responded to 51,265 text conversations.

The Assistant Minister to the Prime Minister for Mental Health and Suicide Prevention, David Coleman, said the Morrison Government’s long partnership with Lifeline was part of its resolute commitment to suicide prevention.

“Lifeline’s crisis service and the passion of its volunteers mean that no Australian has to experience their darkest moment alone – they literally save lives,” Mr Coleman said.

Lifeline’s 13 11 14 crisis support service is available 24/7. Australians can speak to a trained crisis supporter any time of the day or night.